We had a good turnout for the September 2018 DARN Brunch--13 in total!

Jerry K6AV came, and was looking good. Diana Ai6DF, the Los Angeles ARRL Section Manager was also there for the fun. Jeff, KK6LP came and it looks like he will be joining the group. Uni came in from Landscatter … (Lancaster). Bob KQ6LS, as well as Joe WB6BJM, and his wife Maria KF6NZY. Dan K6DJS temporarily interrupted his leisure to come too.

There was a lot of chatter about the various studios represented in the group, from Disney to Sony, and a few more.

It was great fun, and the last of us rolled out the door at about 2:00pm in the afternoon.

We will do the same next month too...  Saturday October 13th... The date had to be moved to accomodate both the SCRRBA and 220 SMA meetings on the 20th--which can't be missed. 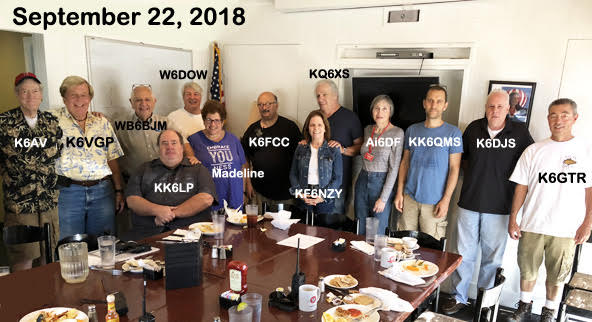