Had a great brunch today… 16 folks came… including Mike, K6MJU, and KK6MJU (Theo. Mike’s son is planning on that call). Joe, WB6BJM was there with his son KF6OHM and grandson Anthony, working on his call. Joe, BJM, brought a friend Ron, K1ZPZ from Paramount. Dennis K6GSE, and Joe KK6WKT made it, and many regulars were there as well.

We all had a good time… There were some new radios shown off, and if they pan out they will be some of the prizes at the December Bash on December 9th at alpine Village. HOLD THAT DATE, it’s going to be a great day.

On a system update, Mike and I went to Mt Disappointment and Mt Wilson Friday. At Mt D we added a new amplifier to DARN 2, and 446.24 is back to 100 watts output... should be better in all areas... about a 6db improvement.

At Mt Wilson, Mike and the mesh group worked on all things microwave and mesh. We have a microwave 3 and 5gHz command and control backbone that include, Mt Wilson, Mt Disappointment, Verdugo as well as a few other sites we do not control, and will soon include both Palos Verdes sites (DARN 1 and DARN 6). In addition I found the 2 meter transmitter on 147.36 was only putting out 75 watts... I opened up the amp and did some tweaking, and it is back to 300+ watts, a 6 db improvement, and just barely gets warm. See the wattmeter picture below... the 2M radio should be against the pin almost anywhere now, and really great for duplex.

Our next brunch will be on November 17th… hope you can make it… and watch for the official announcement for the DARN Bash on Sunday December 9th with all details. 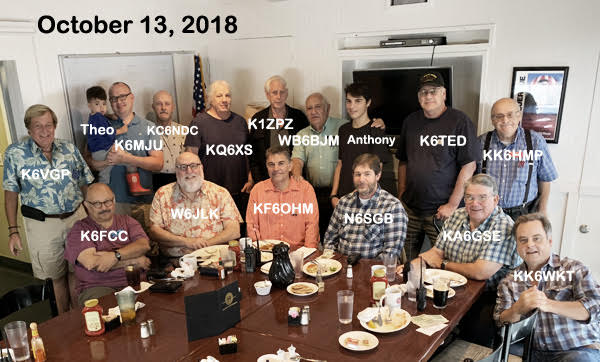