We had a good turn out today  15 hearty souls for food, talk and sharing our latest toys.

The usual suspects were present …. Mike K6MJU joined today, with (K6)Theo (new vanity call), and was showing off a new “network radio” which is a cute gadget that looks like any small hand held and connects to the internet by data or wifi, and in turn connects to our system (or others) by Allstar, yet the “radio” acts just like any HT in that when on, it is always receiving, and uses a regular PTT switch to key transmit …. no software to start, just turn it on like any radio … pretty cool gadget. and Doug W6DOW and Madeline came with Doug's father Oliver. Our section Manager Diane, AI6DF came to share some wisdom about the latest ARRL goings on  and John KM6MMK came up from the OC to have some fun, and get a little sunshine riding his bike. Clint, W6UY joined us, but didn’t make it in the picture.

I think the distance record for the day was won by two of our San Diego members, Chris AA4CD from Carlsbad, and Matt, KI6KHB from Pasadena. Chris has been the mover and shaker who has gotten us seriously involved in total San Diego Coverage, with the addition of Mt Soledad, Cougar Peak, Mt Woodson and Mt San Miguel to the Mt Otay we had been using for years. He also owns the Cocoa Beach Florida DARN 42 repeater that is connected to the system full time. Thanks Chris!

Another long distance driver was Cecil WD6FZA from San Marcos near Carlsbad. Cecil is the mogul of the PAPA System, another great SoCal radio group that has repeaters everywhere. I don’t think he was spying …. at least I didn’t see a lapel mike. Actually Cecil has one of his PAPA meetings at the Spitfire this weekend, and he’s a good friend, so he stopped by to share radio tales with me after his meeting.

All in all a great day at the Spitfire. 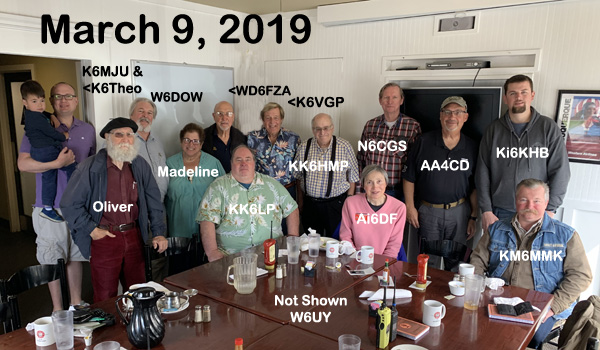